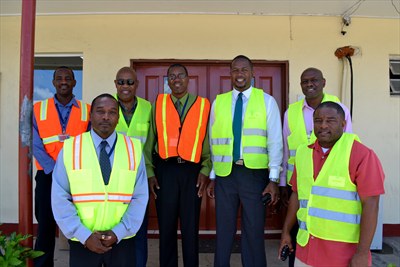 According to former Senator, Carlton Dowe, SCASPA was chosen as a choice Port to visit because it is one of the leading Ports within the Caribbean region that boasts of a series of successful projects and initiatives even with the downturn of the economy. Mr. Dowe highlighted that from the discussions and tour, the Virgin Island Port Authority will assess its current operations and financial status and consider some of the best practises used at SCASPA in its operations and strategic development.

Mr. Jonathan Bass spoke of SCASPA’s new wave of investments in the meeting. Projects highlighted included the construction a second pier at Port Zante, a Breasting Dolphin at the Cargo Port, a one Megawatt Solar Energy Farm at the RLB Airport, the replacement of the 25 year-old runway lighting cables at the Airport and the designing of a new Master Plan for the Airport, which will include the reconfiguration of the interior of the Terminal.

The discussions highlighted the similarities and challenges shared between both Authorities and underscored the need for further future meetings and strategic partnerships to enhance the operations and facilities of Ports within the Caribbean to successfully thrive in the travel and trade industry.