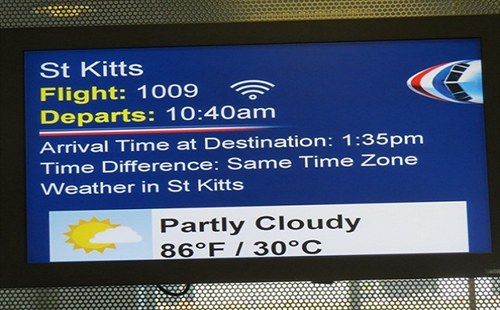 The U.S. carrier is also changing the schedule for its non-stop flights to St. Kitts from New York JFK beginning Nov. 21, 2013, ideally timed for the peak winter travel season.

This expands American’s Miami service to 11 flights weekly, including twice daily service for four days per week from Thursday through Sunday.

From JFK, the flights will depart New York on Wednesdays and Saturdays and overnight on St. Kitts to return the following days, Thursday and Sunday morning.

The timing of the JFK flight southbound also changes to an afternoon departure from JFK with a morning departure northbound the next day, allowing for a greater number of connections in New York.

The northbound return flight AA1746 will depart St. Kitts at 8:40 a.m. and arrive at MIA at 11 a.m. every Friday through Monday.

American Airlines now uses a Boeing 737-800 aircraft for all flights into St. Kitts. These two additional daily flights continue a series of service increases to St. Kitts by American Airlines over the past eight years during the tenure of current Minister of Tourism and International transport, Sen. the Hon. Richard “Ricky” Skerritt.

American first started its Miami service to St. Kitts in December 2004 with three flights weekly, which grew to five flights weekly in 2006 and to daily flights in 2008.

American has operated twice weekly service from JFK to St. Kitts since November 2007.

SCASPA Security Officers highly rewarded by SCASPA Board of Directors