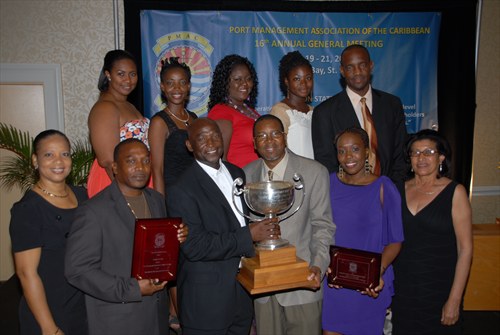 Bird Rock, St. Kitts – June 24, 2013 (SCASPA): For the second consecutive year, SCASPA won the Nova Port Cup awarded by the Port Management Association of the Caribbean (PMAC). This was announced at the Awards Dinner during the 16th Annual General Meeting of PMAC held at the St. Kitts Marriott, with over 12 countries in attendance.

The prestigious 2012-2013 Nova Port Cup was awarded to SCASPA for its port efficiency, best standards and practices and profit ratings and for recording the highest level of improvement over its previous year’s performance.

Chief Executive Officer of SCASPA, Mr. Jonathan Bass, indicated that achieving the award for the second consecutive year resulted from the dedicated work of SCASPA’s management and staff.

“Achieving this award was a team effort by SCASPA’s management and staff. The award is well deserved and is a reflection of our commitment to the transformation of SCASPA into a profitable, customer-focused organization with a motivated and productive work force. This commitment is bearing fruit. Management and staff will continue to work diligently to retain the cup and improve on the great strides we have made in building a culture of excellence.”

The 16th Annual General Meeting of Port Management Association of the Caribbean was hosted by winning Port SCASPA during June 19 – 21, 2013. With an attendance of over 55 participants from within the Caribbean, South America, North America and Canada, this meeting was the largest attended PMAC AGM within the history of PMAC. The AGM afforded participants the opportunity to engage in constructive dialogues that sparked innovative ideas and actions that will ensure operational efficiencies and financial viability amongst Caribbean Ports.

Chief Executive Officer, Jonathan Bass, shared, “The AGM was a success because of the hard work executed by SCASPA’s organizing committee and the active involvement of the delegates in the sessions. It is an exciting time for SCASPA – we not only won the prestigious Nova Port Cup Award but we also successfully hosted the largest PMAC AGM. The success experienced by SCASPA this past week is a clear indication of the excellent direction that SCASPA is moving in.”