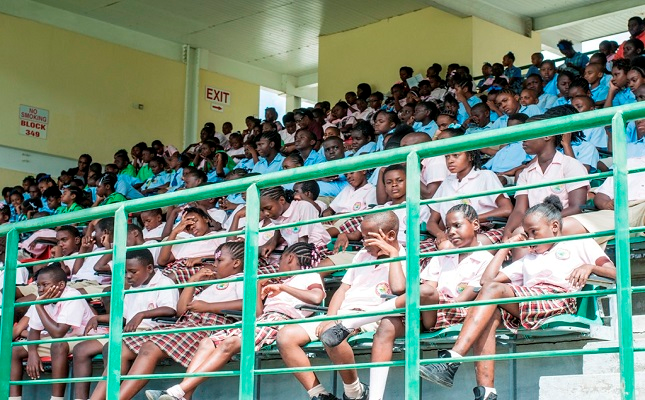 SCASPA joined forces with the Royal St. Christopher and Nevis Police Force (RSCNPF) in hosting the graduation ceremony of the Mentoring, Advising, Guiding and Instructing Children programme (M.A.G.I.C.).  Three hundred and seventy-four students (374) from primary schools around the island graduated from the program on April 23, 2014.

Mr. Everette Mason, Assistant Security Manager represented SCASPA at the graduation ceremony which marked the conclusion of ten (10) weeks of training in lessons about the harmful effects of alcohol, tobacco, marijuana, hardcore narcotics and prescription medications. Additional topics covered were drug resistance, bullying, and the dangers of gangs. The students also developed skills in goal setting and conflict resolution which are incorporated in the interactive sessions and portrayed through multimedia presentations.

The M.A.G.I.C. programme was implemented by the Special Victims’ Unit (SVU) of the Royal St. Christopher and Nevis Police Force (RSCNPF). The local initiative was modeled after a programme in the Orange County Sheriff’s Office (OCSO) in Orlando Florida, USA.

Mr. Everette Mason, Assistant Security Manager of SCASPA expressed his satisfaction with the ceremony and programme.

“The enthusiasm seen during the graduation ceremony was tremendous. I was particularly proud that SCASPA showed its commitment to youth development through the sponsorship of this great program. I am pleased that the students learnt how to care for themselves and make wise choices.”