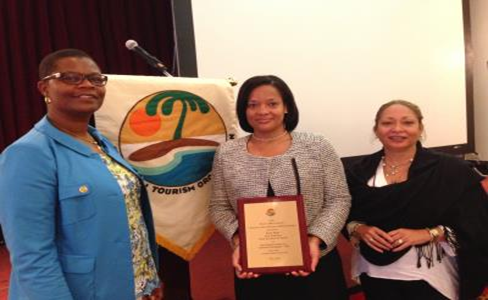 Continuing to add to its growing list of awards and recognitions, St. Kitts has kicked off the summer with an array of new distinctions from prestigious outlets and organizations in June. Most recently, St. Kitts received an award for Best Feature in a Consumer Newspaper at the Caribbean Tourism Organization’s Travel Media Awards Luncheon held on Thursday, June 5, 2014 during Caribbean Week in New York.

The article, entitled “Float Your Boat in St. Kitts,” was written by Terry Ward touting St. Kitts as a great choice for soft adventure travel.  It was published in a two-page spread in the New York Post as well as on the publication’s website.  “The fact that more and more organizations are recognizing St. Kitts for excellence is a testament to the strategic growth of our tourism product as well as the intrinsic value of the island itself and the strength of our economy,” said Senator Ricky Skerritt, Minister of Tourism & International Transport. “Our government has placed a particular focus on building tourism as a primary economic driver since 2005 and, clearly, these various distinctions indicate that we are succeeding.”

Earlier that same week, an article in Business Insider published on June 2 ranked St. Kitts & Nevis at number fourteen among its Top 50 Destinations to Watch based on data from the World Travel & Tourism Council.  It is one of just two Caribbean countries to appear on this list and ranks the highest.  Also on June 2, St. Kitts & Nevis earned the number one spot in foreign direct investment inflows per capita in the Caribbean, the highest in the region by a wide margin, in an article appearing in Caribbean Journal.  The ranking was based on data from the recently-released Foreign Direct Investment in Latin America and the Caribbean report from the United Nations’ Economic Commission for Latin America and the Caribbean.